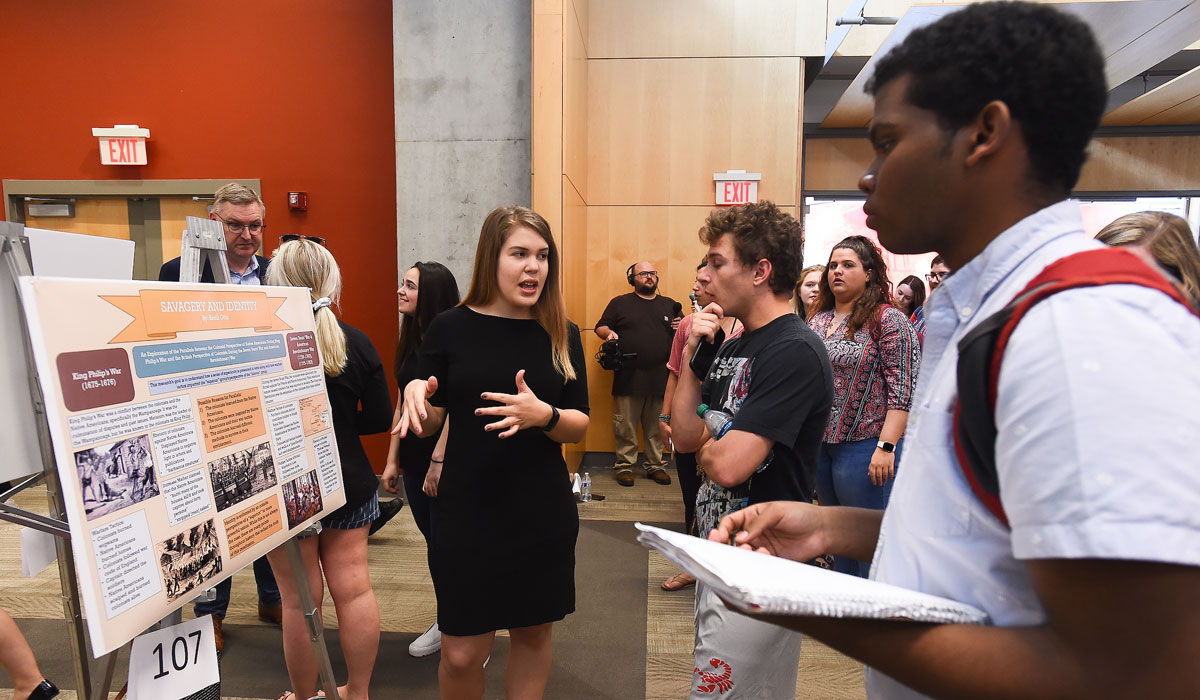 The deadline for abstract submission for University Research Day 2022 is Feb. 3, 2022.

We would like to encourage ALL members of the Catholic University community to submit applications to share your work with others. Research represents a very broad term in this context and could include a scholarly paper, a project you worked on with a faculty member, a recent presentation you gave at a professional meeting, a dramatic or musical performance, a display of art, or anything else that falls under “scholarly work.”

URD 2022 will include opportunities for posters and oral presentations. The virtual poster session will consist of posters with 5-minute pre-recorded videos and a live Google document to ask and answer questions throughout the day. Oral presentations will be recorded and presented during live Zoom sessions on URD and will include a live question and answer period with the presenters. If public health conditions permit, we hope to include several in-person oral presentation sessions on campus via Zoom.

At URD, participants’ scholarship is presented in a way that ensures accessibility to everyone — even those unfamiliar with the subject matter. Abstracts should reflect this, written with clear, non-technical language that is geared for ALL people. Examples of past selected abstracts are available below. Submitted abstracts will be judged by members of the URD Planning Committee and selected presenters will be notified by email.

Look for more information on social media from our hashtag, #CUatResearchDay and from this website including important dates, the format for the presentations, and the link to the application form. In addition, the names of the current planning committee members are listed on the website, should you have specific questions.

Abstracts: If you are interested in presenting a paper, poster, or interactive demonstration, please complete the abstract submission form. Abstracts must be received by February 3, 2022 at 5 p.m., to be considered. Submissions received after that date will not be reviewed.

ALL abstracts must be written for a general audience and use non-technical and jargon-free language. If you are interested in presenting a paper or project, or presenting an artistic performance or project, please find additional information in the Presentation Guidelines section of this website BEFORE submitting your abstract.

Requirements: Abstracts must be no longer than 500 words and written in clear, non-technical language that is geared for a general audience who is not familiar with your work or your discipline.

Submission Deadline: Abstracts must be received by 5 p.m. Feb. 3 to be considered. Submissions received after this date will not be accepted.

Abstracts will be judged on the following elements:

The abstract can be based on:

Breakaway Device for an Osseointegrated Prosthetic
This engineering design project is for the benefit of a U.S. military veteran who lost his leg in battle and requires a device that allows him to be more active and participate in activities such as mountain biking. After complications with his initial amputation and a traditional socket prosthetic, the subject and his medical team opted for an osseointegration implant. Osseointegration is a two-step implant system in which a threaded rod called a fixture is surgically inserted into the bone. The bone grows around it, after which a second rod called an abutment is inserted into the fixture onto which the prosthetic is attached.
Osseointegration is an emerging option for amputees and currently remains under evaluation by the FDA. In our case the individual has an above the knee amputation and the osseointegration implant resides in his right femur. Forces on the prosthetic are transferred directly to the femur. A large force or moment can potentially fracture his femur and cause a number of complications. Our breakaway device detaches his prosthetic from the implant system when impact exceeds a threshold, preventing injury. The threshold value is determined by a combination of experimental data and a safety factor. Breakaway mechanisms have been designed and fabricated for axial, torsional, and lateral forces.
Designs are simulated using SolidWorks and validated by force analysis. Mechanical testing is achieved by attaching the device to a prototype model of an osseointegrated implant system. This model consists of a clean and sterilized bovine bone with a rod insert. Our intention is that final designs will allow our subject and other osseointegration implant patients to lead more active lives by safely participating in activities such as mountain biking.

What’s Killing the Yeast? Learning about How Antidepressants Work Using Yeast Genetics
The gut contains a diversity of microbes (i.e. gut microbiota) that contribute to the wellbeing of the host by performing duties such as synthesizing compounds that our bodies require. Studies have shown that the gut microbiota contributes to the health of the central nervous system and brain function. Changes in the diversity of gut microbes have been observed in patients with depression leading to the possibility that the gut microbiota may contribute to this condition. Furthermore, patients who begin taking antidepressants usually do not experience the positive effects of the drug for several weeks. These observations suggest that the known targets of antidepressants may not be the only factors that explain their mechanism of action. To identify additional targets of a commonly used antidepressant, Prozac, we screened a library of 4,577 yeast gene mutants looking for ones that were hyper-resistant to toxic levels of Prozac. We found 48 gene deletions that conferred some degree of resistance to Prozac. Furthermore, it appears that some are resistant to other commonly used antidepressants, such as Elavil and Zoloft. The 48 genes have functions in a variety of processes that range from flipping phospholipids into the inner leaflet of the plasma membrane and insertion of proteins into the ER membrane to protein degradation and vacuolar ATPase assembly. We suspect that some of the mutations may point us toward additional mechanisms of how these antidepressants may be working in the brain. This work also suggests that antidepressants may be disturbing the diversity of gut microbes in patients, which may be contributing to the action of the drug.

The Lararia of the Roman Empire: Examining the Daily Religious Experience of an Everyday Roman
Among the most ubiquitous religious spaces devoted to the Roman gods are household lararia. Each lararium is a miniature shrine to the household deities of Ancient Rome, the Lares. These Lares were gods of the household, charged with protecting all members of the Roman family. All members of a Roman family had duties to the Lares: Roman fathers were charged with leaving offerings each day, the children would leave special offerings on great occasions such as marriage or the reaching of maturity, and the servants would tend the shrines daily. Although these shrines come in many forms and appear in various locations throughout the Roman house, they often share similar imagery of the Lares and many were constructed to appear like miniature temples. It is likewise important to mention their centrality to the Roman home; the often rich decoration and frequent use of a lararium attests to its central place in a Roman’s daily religious life. Some period literary sources, such as works by Cicero, Cato, and Plautus, preserve certain aspects of Roman domestic religion. This information, however, is not sufficient for a full examination of the functions of lararia. It is my intention to examine the lararia themselves in detail, rather than speaking primarily about the nature of the Lares. I will discuss the function, form, and decoration of lararia from both archaeological and artistic perspectives. The goal of this examination will be to better understand the daily religious life of an ordinary Roman. Individual examples of lararia from archaeological sites such as Pompeii, Herculaneum, and Ostia will be the crux of this study, and they shall be compared with one another in terms of their function, form, and decoration. Lararia can be found in various locations within a house, ranging from the atrium and garden to the kitchen and other service areas of the house. Some lararia are simple niches in walls, while others are freestanding shrines that appear like miniature temples with columns and pediment roofs. Both types of shrines are lararia, but they appear almost nothing alike. Why are they so different? There are many possible explanations behind such differences, such as the economic class of a household, the aesthetic preference of the shrine’s commissioner, or even one individual's understanding of where and how the gods should be worshipped. The purpose of this study is to better understand the daily religious life of the individual Roman. While an ordinary Roman may have occasionally witnessed a sacrifice at a temple, this was not an everyday occurrence. On the other hand, Romans were required to sacrifice to the Lares each day at their household lararium; such sacrifices and prayers were central to a Roman’s religious life. The everyday religious experience of a Roman, then, was marked more by what rituals they performed at their household lararium than by the rituals performed by a select few at the temples. By examining multiple examples of lararia and their contexts, we can learn more about the individual Roman's daily religious life.

The Gender Wage Gap: Trends and Implications in the US Labor Market
The gender wage gap has been, and continues to be, an academic area of considerable debate and investigation. Over the past 35 years, dramatic shifts in the gender wage gap in the United States have acted as a catalyst to new studies exploring the trends and extent of the gap as well as its possible explanations. Particularly during the 1980s, the gender pay gap narrowed as a result of increased participation of women in the labor force and in traditionally “male” occupations. In this presentation, I will explore the considerable decrease in the wage gap during the 1980s, focusing on trends of the gender wage gap in the US from 1980-2010 and investigating possible explanations for the current differences in annual and weekly salary for men and women. I will particularly highlight recent studies which show that by 2010, conventional human capital variables--such as years of schooling, experience, and degree type--taken together explained little of the gender wage gap, while gender differences in occupation and industry continued to be important. When considering explanations for the wage gap, gender differences in gender roles and the gender division of labor remain salient, and discrimination cannot be discounted, especially in firms seeking to maximize their own preferences and biases rather than maximize profit. Finally, I conclude by exploring increased transparency in the labor market as a possible solution to narrowing the gender wage gap in the future.